This Workshop was organized as part of the ETSI STF 560 study that investigates the current trusted services systems operating in different regions of the world (in this case, Mexico and Latin America), and the possible mutual recognition and/or global acceptance.

In particular, the study aims to identify new measures that could be taken to facilitate cross-recognition among the EU trust services, based on the ETSI standards that support Regulation eIDAS (EU) No 910/2014, and trusted services from other regimes.

The objective of the workshop was to present the European framework of standards in trusted services on eIDAS and to relate it to its application in Mexico and other Latin American countries; to share with the regulatory, supervisors, and official bodies of all current trusted services and discuss how to fit the trust models with ETSI experts. 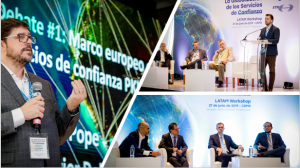 The Discussion panels of the Conference were organized by Logalty, in coordination with ETSI. Logalty is a company that provides evidence generation and custody services through electronic interposition, guaranteeing legal security in electronic transactions and helping its clients in the development of their multichannel electronic businesses at the international level, especially in the challenges of the transformation and digital evolution.

The workshop was attended by 122 people, mainly Mexicans, although there were also attendees from other countries through video streaming, such as Guatemala, Colombia, and Japan. The presence of a significant number of personnel of the supervisory body of the certification services of Mexico was noteworthy. Most of attendees were senior managers of companies from different sectors, such as insurance, banking, consulting, and industry. There were personnel from the Mexican regulator, Economy Secretariat, and the Spanish National Statistics Institute (INE) very active in the debate, being 12% of the attendees, and personnel from the Spanish Embassy.

The conference opened with a welcome speech by Mr. Lino de Prado, President of Logalty Mexico, and Mr. Nick Pope, Vice President of ETSI TC ESI. After that, Andrea Servida, Head of the “eGoverment and Trust Unit”, participated in the workshop through a video conference on the eIDAS Regulation of the European Commission.

The first panel discussion was moderated by Mr. Ignacio Alamillo, PhD in Law with doctoral thesis on the regulation of digital identity and trusted services within the European Union, with the participation of Mr. Nick Pope and Mr. D. Olivier Delos, both ETSI experts. After that, the European framework of standards in trusted services on eIDAS was presented

The next session was about the value of the ETSI standards in Mexico, presented by Mr. José Manuel Oliva, Logalty CEO, and with the presence of Mr. Jorge Orión Espíritu Montes, General Manager of Operational Intelligence of CONSAR, Mr. Javier Alarcón, Seguridata CEO, and Mr. Francisco Javier Romero, Sales Director MX & CAM of Edicom. The inclusion of the ETSI standards in the Mexican regulations was presented as a fundamental basis for its elaboration, and the identity was raised as the main problem in Mexico: Currently, there are approximately forty million citizens without identity. There was a debate about the contrast of the eFirma provided free of charge by the SAT and the existence of millions of people who do not even have a birth certificate. Electronic evidence issues and the importance of having Third Party Interposed Services that give full legal guarantee to electronic transactions were also addressed.

After a short break, the session continued with a practical workshop conducted by Doctor Ignacio Alamillo (ETSI expert and Logalty CISO) on international relations with digital certification services between Mexico and the European Union. He presented a comparison between the two legal frameworks for Trusted Services on eIDAS, all the international aspects and how to do international business between both jurisdictions based on interoperability, all of this thanks to the ETSI standards:

To conclude the workshop there was a fourth discussion panel moderated by Mr. Juan Miguel Carreño, Business Development Officer in Logalty Mexico, with the participation of Mr. Marc Musachs, Digital Credit CEO, Mr. José Luis Martínez Téllez, Logalty CIO, and D. Enrique Carlos León, Executive Strategy Manager of DigiPro. The application of trusted services in digital identity models was discussed, highlighting the current problems in Mexico and the rest of LATAM on identity.

After the workshop, Dr. Alamillo held an informal meeting with all the representatives of the Mexican supervisory body, in which it was agreed to send information of the most recent versions of the ETSI standards, for a possible update of the Mexican regulation in these issues.

Through its Express Consent Accreditation service, Logalty records the consents and checks made in compliance with the GDPR.

It is at this time when your customers will give you their consent to use their personal data.

It is here that Logalty intervenes as a third party to provide security.

Do not take risks! We generate electronic evidence; we keep it and issue a certificate of your client’s consents like this.

Thank you for sending us your message.
We will contact you as soon as possible.
There was a problem sending the form. Try again later.